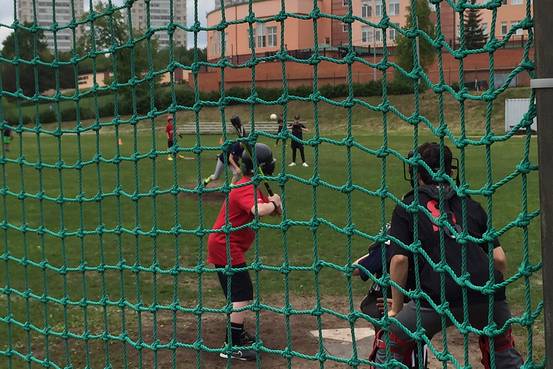 Moscow’s little leaguers play on a baseball diamond on the outskirts of the city on Memorial Day.

MOSCOW – Outside the gated community that passes for American-style suburbia only miles away from the Kremlin, Moscow’s Little League has a problem. The number of players is down by half since last year and there aren’t enough teams to hold playoffs.

“This year, there were so few players we had to lump them together to just get four teams,” said Steve Wolf, 46, a teacher at the nearby Anglo-American School of Moscow.

“We think it’s because of the sanctions. There just aren’t as many parents around,” said Mr. Wolf, watching his son, Luke, pitch.

A year after U.S. and European Union sanctions were imposed on Russia for the Ukraine crisis and the country descended into a steep economic downturn, many Western companies have pulled foreign staff out of Russia, turning what was once a thriving expat community into a shadow of its former self.

Unlike the crises of the past, in 1998 and 2008, this economic downturn has been exacerbated for foreign companies and entrepreneurs by the Kremlin’s strident anti-Westernism. The government of Vladimir Putin has placed some of the biggest multinational companies in its crosshairs, with health officials temporarily closing several McDonald’s Corp. restaurants and the Agriculture Ministry singling out PepsiCo Inc. and Danone SA for checks.

“This year we’ve been going to a lot of going away parties,” said Bernard Sucher, who has lived in Russia for 22 years and serves on the board of UFG Asset Management. “In the 2008 crisis, everyone dug in, expecting to be rewarded by a rebound. This time around people don’t like the way the country is headed and entrepreneurs here are worried about their bottom line.”

An international law firm that deals with global corporate immigration said the number of expatriates applying for new work permits fell by 22% over the 2013-14 period. At the same time, those who are already here are leaving, including heads of businesses whose profits are dwindling, and employees on expat packages being uprooted by companies that are cutting back in Russia. Data from Russia’s Federal Migration Service showed the number of foreigners in Russia from the U.S. and Western Europe’s biggest countries was down 34% in the first month of this year compared with January 2014. In January 2014, the community of foreigners from North America and Western Europe numbered 1,137,000. A year later, it had dwindled to 746,580.

The oil and natural gas sectors had the greatest outflow of foreign workers after U.S. and EU sanctions on Russia’s hydrocarbons sectors cut cooperation, according to people in expatriate relocation services. Eyes are on the retail and automotive sectors for possible expat-staff cutbacks after Russia’s economy fell 2% in the first quarter. General Motors announced plans earlier this year to suspend its St. Petersburg factory and stop sales of its Opel brand and most Chevrolet models.

The departures of affluent expat professionals have caused property prices in some of Moscow’s prime locations to plummet by as much as 40%, said David Gilmartin of Troika Relocations. “Prices are falling because there are a lot of empty apartments. There’s just no demand,” he said.

During Mr. Putin’s first two terms as president from 2000 until 2008, the Russian economy grew by an average of 7% a year, and as foreign investment poured in, so did foreign expertise and personnel. The salaries as well as the lifestyles were often larger-than-life in a city with no shortage of champagne and caviar for a well-heeled crowd living on generous expatriate packages. Mr. Putin’s successor Dmitry Medvedev accelerated efforts to court Western firms, putting in place legal changes that made it easier for companies to bring in foreign specialists.

By 2013, demand for corporate visas to Russia was so strong that New Jersey native Garrett Papas was ready to make good on plans to acquire a local law firm for his employer, one of the world’s top corporate immigration law firms, that would provide a permanent office in Moscow. But by the end of last year, the stream of expats coming to Russia was at a trickle, putting acquisition plans on hold and forcing him to buy a ticket back home.

“From one year to the next we were all-systems-go to on-hold permanently because of Ukraine, sanctions and the investment climate,” said Mr. Papas.

The departure of Western expats means more international corporate units are being led by Russians, according to corporate insiders. At the same time, the number of Chinese living in Russia has surged, a reflection of Moscow’s pivot to China for economic and diplomatic support in the face of sanctions. Migration statistics show a 40% increase in the number of Chinese living in Russia from January 2014 to January 2015. Many have bought property in Moscow as well as in Siberia and Russia’s Far East.

At the baseball diamond, George Crouse, 50, sat with his wife near the hot-dog stand as his two girls played nearby.

“There’s a lot of people going home and just not being replaced,” said Mr. Crouse, who works at a big four consulting firm.