Christmas traditions are an emotional minefield and it behoves those who embrace them to leave a smidgeon of hope to those who fear the Speech, the film with the singing nun and the joyless cannonball that is a Christmas pudding. I have generally found that making the pudding was more pleasing than consuming the result. I was always more interested in the many other lovely things my mother made to delight us over the Christmas holidays. 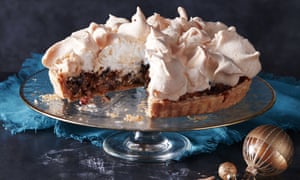 Royal mincemeat pie
My mother made this pie for Christmas a fair few times and its splendid heap of crusted meringue shell atop an apple mincemeat was a wonderful thing.

To make the pastry, work the flour and butter together until a fine crumb forms. Add the sugar and quickly combine. Pour the ice cold water onto the egg yolk and beat vigorously. Pour this swiftly onto the crumbed flour and quickly bring the pastry together into a loose ball. Avoid overworking it.

Roll the pastry out evenly until it is quite thin enough to be moved onto the rolling pin and then unfurled over a 27cm wide tart case with a removable base. Shape the pastry into the edges, cut any excess away, then place in the fridge.

To make the frangipane, beat the butter with the sugar until softened, then add in the almonds. Beat the egg in a cup with a fork then stir into the butter mixture and set aside.

Core the apples and cut into 8 slices each, then mix with the mincemeat.

Spread the frangipane roughly over the base of the chilled pastry case, then tumble on the apple and mincemeat mixture. Return the tart to the fridge for 20 minutes to settle while your oven preheats to 190C/gas mark 5.

Place the tart case on a baking sheet and bake for 30 minutes till the pastry is golden brown. Meanwhile, make the meringue. In a scrupulously clean bowl, whip the egg whites into stiff peaks. Beat in half the sugar until stiff peaks form again. Fold in the remaining half.

When it’s time, remove the pye from the oven upon the tray and settle on a bench. Reduce the oven temperature until quite cool, 120C/gas mark ½, leaving the door open to cool down. Heap and swirl the meringue onto the pye until all is used up and a marvellous scape of peaks is artlessly formed. Return the pye to the oven and bake gently for 20-30 minutes, until a great golden crust forms. Serve warm.

There are many recipes for mincemeat: this one can be made with little fuss and benefits from a maturing of a few weeks. This recipe makes more than a kilo. Use about one third (500g) for the pye and the remainder for tarts.

Warm scrupulously clean storage jars at a low temperature in the oven.

Chop the candied peel into small pieces, and similarly chop the dried figs and apricots. Grate the zest of the orange and the lemon into a large mixing bowl, then squeeze in their juices. Grate the apples and quickly toss them in the juice and the zest. Add in the chopped peel and fruit, the rest of the dried fruits, the chopped almonds, muscovado sugar, suet and spices. Mix all very well together and then add the tipples. Mix well again.

Decant the mincemeat into the storage jars. Seal them very well, then put somewhere reasonably cool for up to several months. 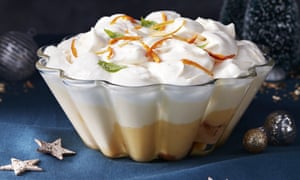 A trifle suggested by St Clement’s

It is no great heresy now to suggest a trifle for Christmas Day lunch. The marvellous lashings of lemon- and orange-drenched custard, clementine curd, cake and syllabub provide the quota of lavish required. Mum always used Elizabeth David’s syllabub and now so do I, a reasonable stab at tradition. The cake element lasts rather well and can be made a few days ahead, and the custard will sit happily in a sealed container for a day or two in the fridge.

For the custard
milk 570ml
lemon peel 1 scrape, similar in size to a piece appropriate for a martini
orange peel 1 scrape, about the same
egg yolks 6
golden caster sugar 45g (vanilla sugar would be best)

First, the cake. Preheat the oven to 160C/gas mark 3 and place the shelf right in the middle. Line a 15cm cake tin with silicone paper. Sieve the flour and baking powder into a large bowl, and add in the butter, working deftly to a fine crumb. Add in the salt, the sugar and then the grated rind of the orange and lemon. Add in the beaten egg and the fruit juices. Mix this lightly, then add the milk and mix again until a soft dropping consistency is achieved. Spread the mixture into the prepared tin, then bake for 45 minutes, or until firm and a skewer comes out clean. Leave to cool in the tin for a few minutes, then turn out on a cooling rack until completely cooled. Store in an airtight box until assembly.

On to the custard. Pour the milk into a heavy bottomed pot and add in the lemon and orange peel. Sit the pot on a gentle heat. Stir now and again. Whisk the egg yolks gently with the sugar. When wisps of steam rise from the milk, remove from the heat and pour slowly onto the egg yolks and sugar. Mix well, then return to the pan and stir gently in a figure of eight until the custard thickens. Remove from the heat, stirring until any trace of a foam is dispersed from the surface. Strain the custard through a sieve into a container and let cool. Cover the surface of the custard with clingfilm to prevent a skin forming, then seal the container and refrigerate until it’s trifle time.

Now, the syllabub. Thinly pare the rind from the lemon and put in a bowl with its juice and the wine and brandy and leave overnight. Strain the mixture into a large bowl. Add the sugar and stir until dissolved. Pour in the cream slowly, stirring all the time. Grate in a little nutmeg. Now whisk the mixture until it thickens and holds a soft peak on the whisk. Transfer to a container, cover and refrigerate until needed.

It’s trifle time. Cut the sponge (you might not need it all) and strew upon the bottom of a handsome bowl. Drench the cake in sherry/marsala. Liberally spoon clementine curd on the cake. Over this, pour the custard. Cover the trifle and refrigerate (overnight, if possible).

An hour or so before serving, pour the syllabub in folds onto the trifle. Cover and refrigerate again. Pare the candied citrus peel into the thinnest slices possible, and strew, with the crystallised mint leaves, over the trifle, then serve.

Clementine curd
The recipe makes a fair amount; you’ll use a goodly amount in the trifle but the remainder is essential for little treats through the Christmas week.

Pare the rind from the clementines with great care, leaving the pith attached to the fruit. Likewise the lemon. Squeeze the juice from all the fruits and pour through a strainer. In a heavy bottomed pan, melt the butter then add the sugar, clementine and lemon juice and zest and finally the beaten eggs. Cook the curd over a gentle heat, stirring well but not too vigorously, until thickened. Strain the curd through a sieve and then decant into scrupulously cleaned, warm jars. 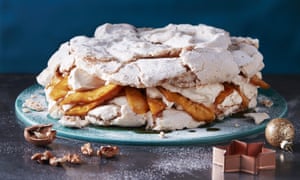 We infants were never likely to get a visitation from three kings. However, things from afar were often brought to the house over the festive season, not least of which was a whole pineapple that sat in a great heap of clementines over Christmas. This simple recipe for two discs of walnut meringue sandwiching pineapple made merry with sugar, orange and Grand Marnier or rum makes fine eating.

You can make this up to two days in advance. The meringue discs can be stored in an airtight box, while the pineapple will happily sit in its boozy syrup in a sealed container in the fridge.

Preheat the oven to 140C/gas mark 1. Line two baking sheets with silicone paper. Outline a favourite serving plate upon each paper to ensure the discs of meringue will sit comfortably thereon.

In a scrupulously clean bowl, whisk the egg whites until stiff peaks form. Whisk in half the sugar, tumble in the chopped walnuts then the remaining sugar. Fold together swiftly, then spoon into discs, one on each baking sheet.

Place these in the oven and turn the heat down immediately – you want the oven to be quite cool, about 110C. Let these cook for half an hour, then check the meringues are not too dark. You want them to be lovely and coffee-coloured. Let the cakes cook for a further 15-20 minutes then switch off the oven and open the door, leaving them inside to cool.

Peel the pineapple and remove its core. Slice the pineapple down the middle and then again, so it’s in four long pieces. Slice these thinly and tumble them into a bowl. Spoon over the dark brown muscovado sugar, which will soon dissolve into a very good syrup. Add to this a good jigger of Grand Marnier and/or rum. Grate in ½ teaspoon each of lemon, clementine and orange zest. Let this steep for a few hours, covered, in the fridge.